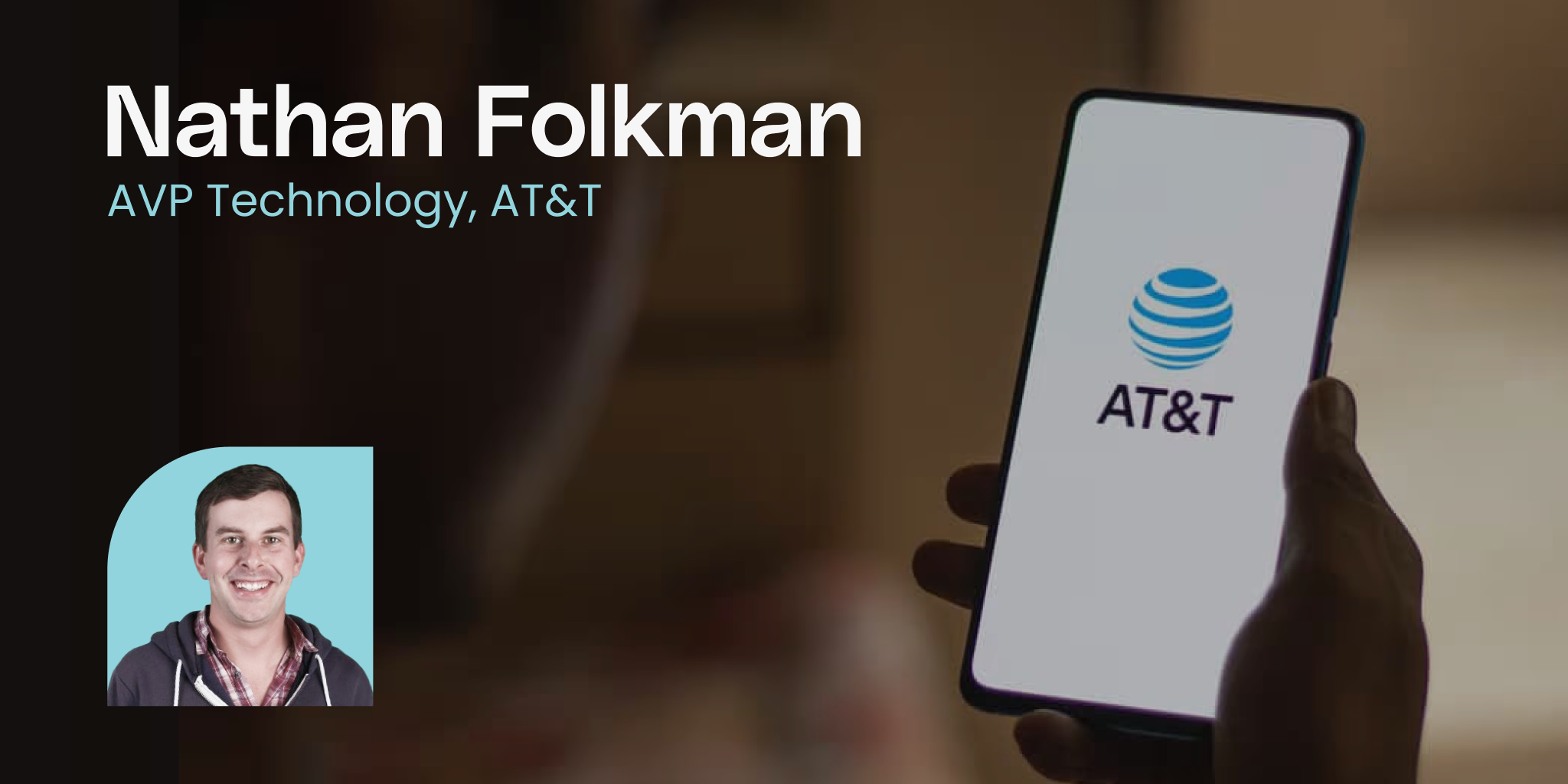 Just another tool or a game changer for developers?

Just another tool or a game changer for developers?

In this interview, we caught up with Nathan Folkman, AT&T AVP of Technology, who shares his thoughts on low-code and how Noodl has been an essential tool for him and his team. He talks about:

“We are doing early market tests on AT&T technology for our enterprise customers. We basically build end-to-end functioning applications so we can validate future investments based on real feedback from our customers. We mix many different APIs and technologies... and that’s really where Noodl shines.”
Nathan Folkman, AVP Technology, AT&T

Anders Larsson: Great to talk to you about low code and Noodl. Perhaps you could start by introducing yourself and telling us what you do at AT&T.

Nathan Folkman: My name is Nathan Folkman. I’m currently AVP Technology at AT&T in San Francisco. Prior to joining AT&T I led an engineering team at the Samsung Design & Innovation Center focused on new product innovation. Before Samsung, I worked in the startup space as the CTO of Path, Head of Operations for foursquare, and was always one of the co-founders and architects of bit.ly. I started my career as a UX designer and then a software engineer at America Online in the late 90s.

AL: I understand that even if you are a VP, you are a quite prolific Noodl user. How do you use it?

NF: My department is responsible for supporting our Product teams as they work to bring new products and services to market that leverage AT&T’s core strengths and capabilities. The process involves rapid development sprints resulting in functional PoCs which help ensure proper market fit and enable us to quickly gather feedback from our partners which facilitates continuous iteration.

Noodl has been an essential tool for me and my team that has allowed us to quickly create polished user experiences integrated with real backend services and even hardware devices.

AL: Your background is very much in development. So, if you can develop, why do you even need a low-code tool like Noodl? Why don’t you just code your apps in classic code?

NF: First of all, It’s a matter of time and effort. With Noodl I can much more quickly get to the interesting parts of the project we are working on. In just a couple of hours, I can have much of my app built out in Noodl. Then I can jump into the more innovative parts of the technology under the hood using my classical coding skills. This doesn’t mean that what I build around my technology is unimportant. Quite the opposite, in the end, the overall experience is what matters and Noodl lets me get it exactly how we designed it, without having to compromise.

Secondly, iterating is key in any product development or innovation process. We are constantly changing things, sometimes quite radically, based on the feedback we get. Iterating in Noodl is so much faster than in classic code.

Another aspect is that Noodl’s node and connection model is just a great way to express complex software. It makes debugging easier because I can see data and events flowing between different software components as I’m running the application. It also makes it easier for new team members to get acquainted with the code base.

My team works very closely with our design teams and Noodl’s visual node-based editor allows them to do more easily collaborate and contribute even though they may not have much engineering experience.

At the same time, I can understand why some coders are shying away from low code given some other tools I’ve seen, but Noodl is really an amplifier for a coder. Not something that sits in between you and what you want to achieve.

AL: So can you give an example of what you are actually building with Noodl?

NF: Obviously most of the stuff I do is very confidential. We are generally doing early market tests on AT&T technology towards our enterprise customers. Simple prototypes or tech demos are not enough, we basically build end-to-end functioning applications so we can validate future investments based on real feedback from our customers. We often end up mixing many different APIs and technologies, both public and private, and that’s really where Noodl shines.

Lately, I’ve worked with a lot of IoT. One of the recent Noodl modules I created is a super lightweight IoT application that leverages Google's Protocol Buffers. Using this module made it incredibly fast to build a bunch of different IoT applications.

AL: You mentioned enterprise customers. How does Noodl work in an enterprise environment?

NF: Perhaps the most crucial requirement in an enterprise is to be able to run the software within the company's IT structure. Noodl is very flexible in how it’s deployed - in the end it’s just a web frontend with a Node.js backend and MongoDB database. So we host it completely on-premises. The fact that most of the backend components are standard, battle-proven technology makes IT happy as well.

Another important aspect for large companies like AT&T, is the ability to build up value in your software stack over time. Here Noodl plays a big role since it’s very easy to extend with reusable components and modules. An example is with my IoT module I mentioned before. This module can be reused again and again, in different projects. It makes it possible for team members with very little IoT expertise to be productive quickly.

AL: Talking about low code in general. You’ve worked with tech in both startups and huge enterprise companies, what place do you see for low code in the future?

NF: For me, it's a given that low-code tools will be a huge part of the software stacks of tomorrow. The productivity gains are huge and they are real. I also believe the software developer of tomorrow is not necessarily the same as today and we may see for example designers and data analysts taking a much more active role.

At the same time, I really want to make the case for low code also for traditional developers. Look at me: I love coding and I love to be hands-on with new technology. Low code is not about distancing yourself from that or dumbing that down, just to be able to run a little faster. If you think that’s the case, you’ve just used the wrong low-code tool. A good low-code tool lets you get to the interesting part much faster, then lets you do your thing without being in the way. If applied correctly to your team, you’ll be amazed by the productivity gains you’ll see. We are talking 5-10x.

AL: Thanks for your time Nathan, it was a pleasure to get to know more about how you and your team use Noodl. Happy Noodling and take care

NF: My pleasure. Looking forward to the next Noodl release, I’ve already pinged you guys with some feature suggestions for future versions! 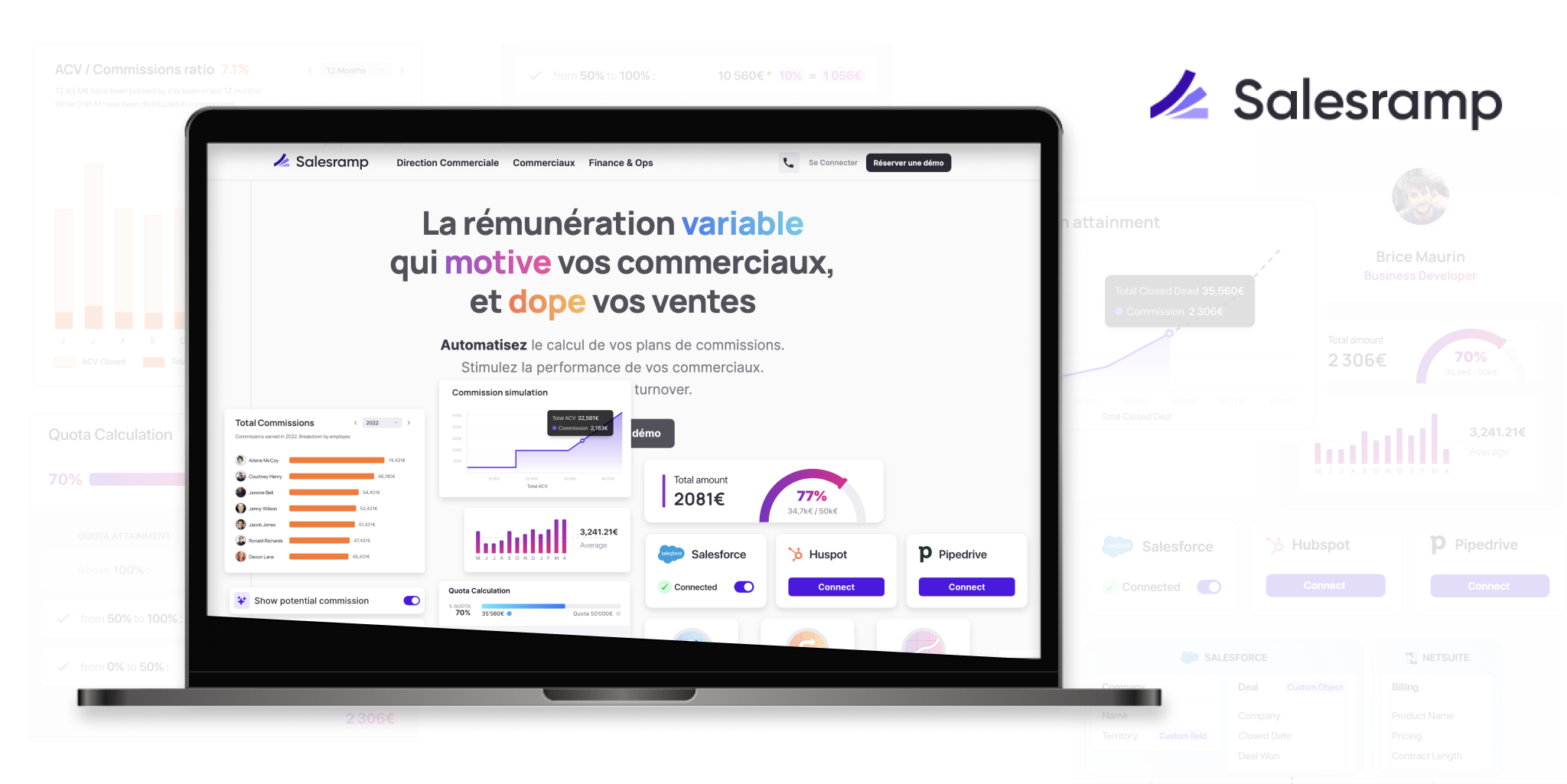 From early MVP to success: The growth of a SaaS tool for automating and managing sales commission