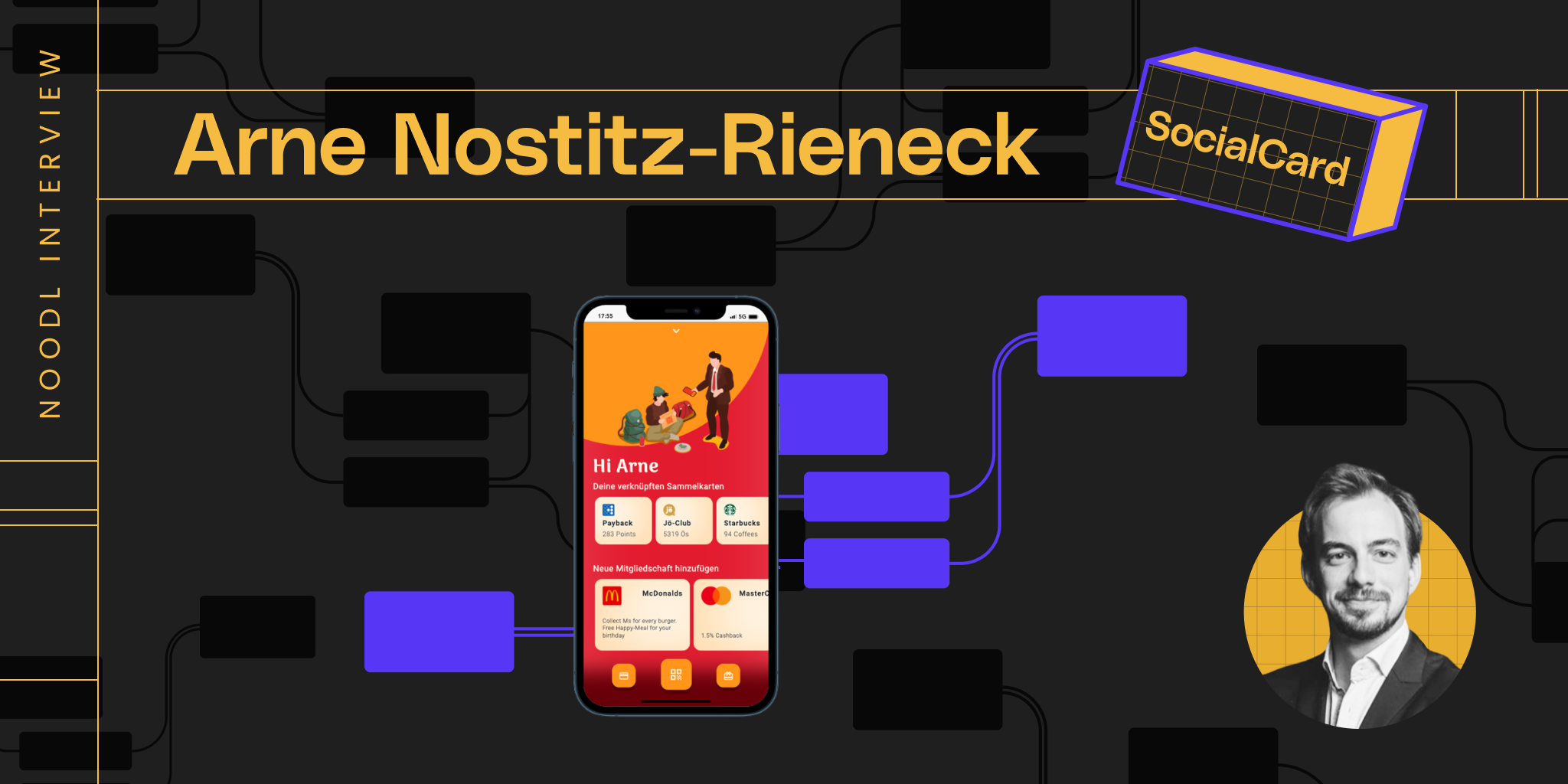 An interview with Arne Nostitz-Rieneck on how he went from directing film and television to creating his own app with Noodl.

Arne Nostitz-Rieneck, follows his passion for helping people in need by creating SocialCard, a quick and easy cashless way to donate. SocialCard is a QR-Code based system that does not require the recipient to have a device, bank account or credit card, but only a code that the donor can scan and transfer funds.

SocialCard was awarded as a winning project in the disadvantaged track at the LA Techweek Hackathon 2022.

Read how it went and how Arne uses Noodl to build the interactivity of his application concepts.

My name is Arne Nostitz-Rieneck, I am a director for film, commercials, and music videos. I am a professional storyteller using my skills in classic entertainment but also augmented and mixed reality. I am mostly known for my colorful and entertaining comedic style and my eye for detail.

I work as a director and assistant director in advertising, film and television by day - but at night I turn into a "chef, cooking Noodls".‍‍

I have basic knowledge that goes back to when I was at school. In addition, I have dabbled with PHP and Html in the past. So I have some experience, but not enough to code by hand. I understand the rudimentary concepts, but complex javascript is difficult, due to the lack of knowledge of the language.

I am the Founder of SocialCard - a cashless donation system that does not need a digital device, credit card, or bank account on the receiving end.

In a society that becomes more and more cashless, those unfortunate enough to not have housing, often also don’t have a bank account, credit card or smartphone. They are not able to participate in a digital payment flow.

SocialCard is a QR-Code-based donation system, which only requires the donor to have a device. Donating through digital payment providers such as Stripe is as easy as an exchange transaction, by simply scanning the QR-Code linked to a personal account to transfer funds with one touch.

The QR-Code can be used like a debit card to buy groceries, and pay for accommodation and other services such as medical care at cooperating shops and service providers. But funds cannot be exchanged for cash, so misuse of a well-intentioned donation is out of the question.

In addition to cash, the next step is to include loyalty programs such as frequent flyers, cashback credit cards, and membership cards to be able to use the collected points also as donations.

The project is in a not-funded state. It's basically just an idea. But having a working prototype helps to communicate the idea to people who cannot imagine how it could work.

I’m not a programmer and I know from experience that otherwise bringing an idea like this to life is an impossible task. With no-code or low-code tools like Noodl, a creative person like me can quickly iterate the idea and bring something to the table that people can actually use. This way I can do it myself to the point where there is a team to take care of it.

Noodl was the easiest for me to understand. Coming from a post-production environment, I am very familiar with node-based systems. So it was familiar ground and, as a visual person, the idea of seeing the flow makes it much more fun and understandable. The tight integration with the database, the live version right out of the box and the low-code approach of extending the system via javascript and other tools were key.

It took me a while to accept that it is not possible to create a file that can be handed over to a programmer to extend the application without them using Noodl. This is something I also experienced with other tools, such as AppGyver.

But in comparison Noodl seemed (and proved) to be powerful enough to get to a point where the prototype can also be used in production.

Another reason was the native Mac application. Browser-based systems are nice, because they work on any device. But they are usually very slow compared to a native application. And after upgrading to a native M1 code base, the app is as fast as I can think of. That's really amazing.

I have looked at dozens of different tools. I have already started working with AppGyver, but the tool is slow and has not aged well. Iterations are practically impossible when the project is more complex than a few pages. Besides the most prominent options like Bubble, I looked at tools like FlutterFlow, AppSheet and many others.

I stumbled into it. The initial idea dates back a few years, but during the pandemic I started working on it. SocialCard was part of an Austrian accelerator programme and the concept had already won a few awards at startup events. The idea gained some traction, so now I see how far it can go.

Also, the more I get involved, the more I see the urgent need to bring this project to life. Right now I am in Los Angeles and the homeless situation is an even bigger problem here than in Austria. So maybe this project can be expanded to help even more people.

It is becoming more and more of an addiction every day. Working in Noodl is fast and joyful.

Noodl has helped me in every regard. The learning curve is incredibly easy. Going from idea to final design is something that happens so quickly, that right now I am not using any other design system anymore. Trying something out usually takes a day or two, if I am not hitting a speed bump, because I fail at a javascript component or other things. But then the amazing team of Noodl is always just a discord channel away.  I really cannot express enough gratitude to the incredible support people at Noodl.

It is actually more difficult to answer this question. Everything seems hard at the beginning, but in the end it is solvable. There are still things I'd like to include but haven't looked at yet - and I think they will be more difficult - such as authentication with systems other than e-mail, authentication by phone, credit card payment, security, notifications and so on.

Now it is a bit detailed, but I think the hardest thing to do was to compare two arrays. But the Noodl support solved that in a jiff! so I guess it's only difficult if you don't understand the language :)

And Noodl's arrays are something I still don't quite understand.

What resources has helped you the most to learn Noodl?

The docs are gold. They are very helpful. As are the demo projects. But the best resource was the discord channel and the amazing team behind Noodl. There hasn't been a block yet that they haven't solved.

Which modules did you find useful for your project from our documentation site? Any wishes?

They are all very good, especially now with the new version. I guess wishes would be authentication systems (apple/google login, phone auth), and a way of sending notifications and e-mails without external tools like Zapier.

Be joyful and try things out. Just do it - only good things can happen.

Arne's journey is a great example of how one can turn an idea into reality with the help of the right tool and creativity. His experience shows that even if you're not a coder, Noodl can be used to prototype your concepts without any coding involved!

Don’t forget to download Noodl and try it yourself.
‍

Get started for free